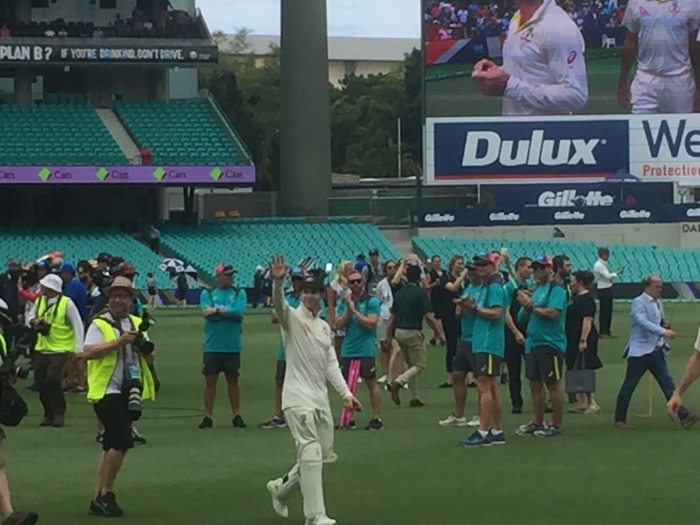 I first met Tim Paine at Lords in 2010. Paine was training with Australian batting coach Justin Langer someone I had known for a few years so I went and spoke with JL and I met Tim for the first time there. Then a young blonde hair wicket keeper From Tasmania. Painey was a nice guy straight always friendly as can be a great human. He was happy to chat for a while had a few moments and he was excited to be making his test debut the following few days. Brad Haddin was out of the tour of injury and Painey was young and looking to take his chance. Paine played 2 tests in England on that Tour the 1st Australia won at Lords and the 2nd Pakistan won at Leeds.

Paine then Went to India a few months later for 2 Test Matches where he scored an outstanding 92 as Australia struggled in a typically hard fought series.

Then the most unfortunate of injuries hit Paine went from playing test cricket and a star player to being seriously injury while talking to Mark Taylor on TV and batting against the tricky to face Dirk Nannes in the infamous match at the Gabba.

Paine was out for over 2 seasons he struggled to get into the sport for a while mentally. His finger was so badly broken people said he may not recover. He had finger operations all 6 failed then he went to a new doctor in Melbourne who decided to look at his hips decided he would take some of the skin off his hips and put them into his hand. Tims hands are not 100 per cent and he tells me he thinks they won’t be great ever again as obviously keeping to Pat Cummins, Mitch Starc and Josh Hazlewood plus others like James Pattinson when he returns will ensure Tims fingers are very much tested for the rest of his career.

In my view something worse in 2014 occurred. Tim was dropped by Dan Marsh his state coach days after the horrible moment that the great Australian opening batsmen Philip Hughes sadly died at the SCG. Considering Paine and all the players attended his funeral it was incredible beyond belief that a state coach or any human could tell any player you have not scored enough runs it’s disgraceful that Marsh treated Tim like that Painey is a kind wonderful man mistreated by Dan Marsh for years in my view. While Adam Zampa for one was to upset to play a Shield match in Hobart a week after Hughes died. Paine was at home wondering what to do. He lost his faith in Marsh. I feel ashamed that Cricket could treat a Australian captain like that. While amazingly his other coach with Hobart Hurricanes Damien Wright always picked him as captain. Damien is a much smarter thoughtful person than Marsh. Tim is a great team man and leader. Someone you always want around.

Tim Paine is someone I always admired I have supported and stuck by Painey because he’s someone I admire greatly. He was often over looked or injury hit then in 2017 everything changed in was picked for Australia by T20 coach for the Sri Lanka Series in Australia Justin Langer who admires him greatly and always felt for Tim to miss out on test selection was a problem. It was Tims time.

Late 2017 he was picked for the Ashes scored runs did everything right. A great cricketer had returned to Test Cricket. We love Tim Paine in Australia now but I have always known Tim as a great neat wicket keeper now he’s Test skipper and no matter what he will excel. All his team mates praise Tim. He’s the best person I know. 👌🇦🇺👏👏🇦🇺💇🏼‍♂️