Tim Paine is a man I have known for years, 12 months ago I went to watch him play a 2nd XI in Sydney for Tasmania against New South Wales infront of 10 people after the incredible decision by his state coach Dan Marsh to over look the best keeper in Australia. 12 months later he’s won an Ashes series 3-0 scored a 57 and a 49 not out in the Perth Test Match and took 3 catches on the final day.

It’s an incredible story after the incredible cruel treatment from his state coach Marsh Paine has risen with the Ashes urn in hand. I met Tim at Lords in 2010 at his test debut a wonderful team man and terrific person by nature Paine impressed me straight away one to always help others me and Tim have been mates since. He is a very loyal person Paine has shown brilliant form.

Steve Smith Darren Lehmann, Justin Langer and all his current Australian team mates have been full of praise for Tim Paine these men along with selectors Mark Waugh, Greg Chappel and Trevor Hohns have saved Paine’s career and it really is incredible that Dan Marsh ignored Paine’s ability despite the fact that Damien Wright selected Paine as Hobart Hurricanes coach Marsh has been silent this summer and no wonder Paine and Lehmann have shown the value of picking quailty players who have outstanding ability. 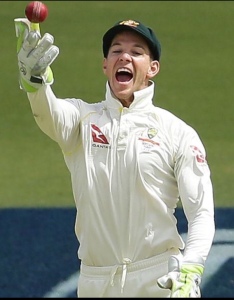 he now heads to Melbourne to play in his 1st Boxing Day Test Match. A hero to many but someone I always believed in a real hero and inspiration what a person Tim Paine is and a player his Australian team mates adore.

Well done Tim cheers to you. See you in Melbourne look forward to it.