Tim Paine has impressed many in his 2 and half matches in this series he’s scored more runs than most thought he would but to those who Tim well he’s a very driven person never one to be happy unless he’s had the perfect day. Painey has always been the type of person who will do things for others and put his team mates above himself. This was seen for with his keeping in Perth putting his hand and fingers on the line to take balls high above his head including an outstanding out stretched reach.

I have known Tim for 7 years being at his test debut in 2010. He has the commitment and dedication to be a long term player. Always working hard in the gym Tim is a very fit man he has the body of a 20 year old not that of a 33 year old as is of December 8 last week. He could be a very long keeper for Australia and if he keeps fit he could play on for another 4 years given his keeping is at level that Australia needs. 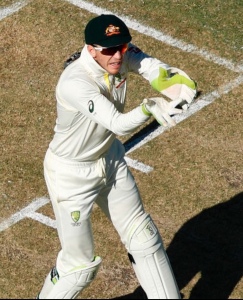 Paine is a great player for Steve Smith given the need for a neat Wicket Keeper Tim always fills this role a neat glove man Tim always says “keeping is my job” which outlines his understanding of the role. While Matt Wade is a skilled keeper and batsman Australia have always needed a neat keeper the safer option perhaps but also the smarter one Paine is a very smart man private to most not many know him that well but Tim is very determined he has the ability of Ian Healy and his current Australian advisor Brad Haddin Tim will give everything his all this Ashes Test at the WACA but also for the rest of the series in MCG and SCG.

People around the world will come to respect Tim for his mental toughness no test keeper has had to come back 7 years after a test debut he has scored a brilliant 50 in the last test match in Adelaide a timely strong resolve Tim has battered fingers and more injuries than people would know but it’s never been his view to make fuss out of anything he just gets on with playing well.

Tim is the only wicket keeper I know who would seek advice off anyone a wonderful thoughtful person. He will do well for years to come.